“When I was young, my father would take the family to Yosemite and up the Oregon Coast and we’d go on vacations in the trees. The trees many, many years ago took root in my heart.”—Jim Fitzgerald

It’s a well defined notion that much of who we become as adults is often predetermined by the incidence of wonder experienced in those impressionable years of our youth. To state that large format photographer Jim Fitzgerald’s respect, love, and awe at the spiritual qualities of trees and nature left an indelible mark on the life he currently leads, is far beyond understatement!

That the world’s most ubiquitous and essential element, the grist of life, carbon, is at the center of and integral to Jim’s practice, is also a wonder. Trees and their special alchemy cleanse the air and in so doing, create wood that Jim uses to handcraft his large format cameras, simultaneously fueling Jim’s passions for both woodworking and photography. He then takes his 30 lb. creations on trips retracing the places and capturing the beloved trees he first became enamored with in his youth! And his beautiful, handcrafted cameras [18-month production time] are just the beginning of Jim’s bespoke process of capturing the beauty, wonder and awe he first felt in the western coastal forests as a young boy.

Staying true to his nature, Jim’s path to render his imagery led to the obscure, fickle, painstaking and involved carbon transfer print process, further homage to the ubiquitous element. Dating to 1864 with just a few other stalwarts using it today, it’s the perfect process for the crowning creation of Jim’s multi step photographic discipline. In addition to the process being earth friendly, viewing the final prints reveals a dimensionality and texture in the print’s surface and unique to the process. Peaks in dark areas and valleys in the highlights add further to the “one of a kind-ness” of each print; the simplicity of the chemical composition of carbon transfer prints just being carbon and gelatin imbue these with archival longevity second to no other.

The images in Jim Fitzgerald’s first Gallery 270 show “Carbon Capture” are ethereal physical manifestations of the profound and intuitive feeling of connectedness to our natural world; this seemingly impossible feat wrought with the basic building block of life itself…and done by a gifted human attuned to the linkage we share with other carbon-based life forms. Connections made to times past, almost forgotten, and those yet to come. Timeless, atmospheric, amorphous, yet on display and fully realized through the magical alchemist and his photographic journey.
—Tom Gramegna, Director, Gallery 270 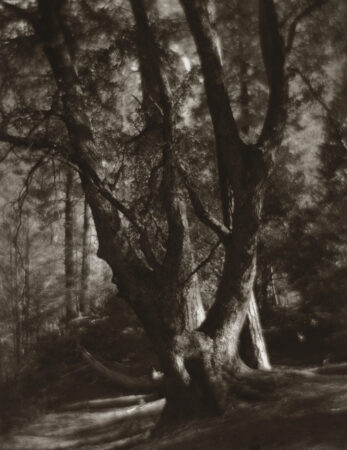